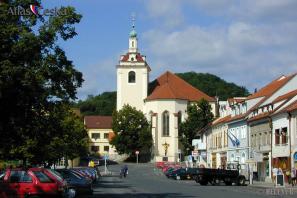 Beroun is a district town which is situated in the Central Bohemian region. It lies on the confluence of the rivers Berounka and Litavka, surrounded by the beautiful scenery including  karst caves and deep forests. Beroun has always profited from its strategic position on the important road and railway connection between Prague and Pilsen. It was founded in the 13th century as a royal town and became rich thanks to trade and crafts. Its importance began to decrease after the thirty-years-war, when it was damaged. Its subsequent development was related to the industrial revolution in the 19th century, which brought the railway as well as cement and lime factory to the town. Today´s Beroun is the administrative and industrial center of the region, it has 18000 inhabitants and a well-preserved historical center. There you can admire the pseudo-Renaissance town-hall, a set of houses on the square with Renaissance elements and Baroque gables, in addition to the town wall and a number of preserved religious relics of which  St.George´s Basilica, from the 13th century, is the most beautiful. Beroun is a point of departure for visits to the nearby  Karlštejn, Křivoklát, Točník, Žebrák castles and also Koněprusy caves.