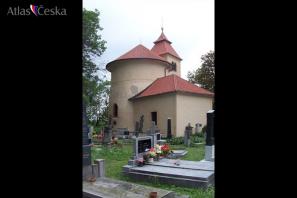 The Budeč hillfort, which was founded by one of the first Premyslids, was one of  many hillforts built by the Slavs on the hills as fortified settlements. Step by step Budeč became one of the basic princely Premyslid residences and one of the centres of newly founded Czech country. Around St.Peter´s Church, there was a princely court. The oldest written references to Budeč come from St. Wenceslas legends from the 10th and the 11th centuries. They say, that Prince Vratislav, ruling in 915-921, sent his son Václav, future Saint and Czech country patron, to Budeč to learn Latin. From the end of the 10th century, when the Premyslids resided in the Prague Castle, Budeč began to lose its military and administrative function and gradually faded into the background.

On the acropolis, there is still the Rotunda of St. Peter and St. Paul with a nearby cemetery. Although it was rebuilt a few times, the walls of a slightly irregular round building with 8 metres diameter are mostly original. That is why it is the oldest functioning building in the Czech republic. During the 20th century Budeč became a popular destination for Catholic pilgrimage. the masses and annual wanderings were renewed. A pilgrimage takes place at the end of June on the name day of the patrons St. Peter and St. Paul and also at the end of September on St.Wenceslas national day.