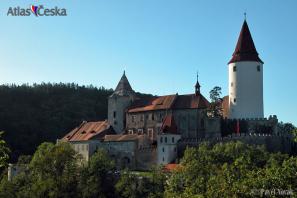 The castle of Křivoklát is one of the oldest and most important castles of the Czech princes and kings. The large gothic castle was constructed in the 13th century and was very popular among the monarchs who used it as a hunting ground thanks to its vantage ground in the forests. Václav I, Přemysl Otakar II and mainly Václav IV took a fancy to the castle as their rest place. Also Charles IV. experienced his childhood there (1319-1323). The period of Křivoklát fame ended with Habsburgs accession to the Czech throne. They have changed it into the state prison. The romantism of the 19th century saved the castle through the purist reconstruction.

The exhibition consists of a  beautiful chapel, royal and knight´s hall with an exposition of gothic paintings and sculptures, library with approximately 52000 bands, afamous prison, torture chambers with torture devices. In addition there is the monumental Great tower with hunting trophies and a view of the surrounding area and finally the tower Huderka with an open-hearth kitchen and the observatory gallery. Křivoklát castle lies 50 km from Prague in the valley of the river Berounka.