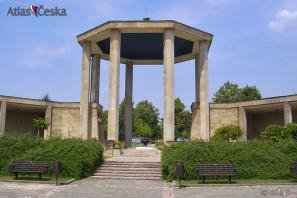 Lidice is a village with 451 inhabitants in the Central Bohemia region, near Kladno, 20 km north-west of Prague.  The oldest record of the village dates back to 1318.  Throughout the centuries Lidice was an ordinary agricultural village, which belonged to the Buštěhrad manor, located in a shallow valley of the Lidice Creek.   The village is not exceptionally beautiful; there are neither castles nor manor houses in the vicinity, nor famous personalites were born there. The most remarkable monument and a dominant of the village used to be a baroque parish church of St. Martin. Nevertheless, this quiet village became world-known; it went down in history in such a way that no locals would have ever wished. On June 10, 1942, the village became a victim of deadly feud, a place of the worst imaginable fury and terror of Nazi occupants towards the Czech nation during the World War II.

A tragic story of Lidice began on May 27, 1942 when Josef Gabčík and Jan Kubiš, Czechoslovak paratroopers, attempted to assassinate the deputy Reichs-Protector Reinhard Heydrich within the operation ‘Anthropoid’. When Heydrich succumbed of his injuries on June 4, 1942, the Nazis decided to carry out an exceptionally deterrent action-to annihilate Lidice.  Lidice was chosen at random and for no apparent reason.  It was supposed to be burned and levelled with the ground, the men shot, the women imprisoned in concentration camps, and the children sent to Germany for re-education.

The action started on June 9 in the evening and its résumé was tragic. There were 173 men shot on the spot. The oldest one was 84, the youngest was a 14-year-old. 184 women from Lidice were deported to a concentration camp in Ravensbrück; 88 children were taken to re-education.  Most of the women and children were later murdered in concentration camps.  In total 340 Lidice inhabitants died (192 men, 60 women, and 88 children).  Lidice was burnt to the ground, remains of the buildings were blown up, the cemetery was destroyed, the trees were cut out, and the creek was buried under waste, nothing was left unspoiled.  The place where Lidice had stood was supposed to be turned into a field and the name of the village deleted from maps.

The crime of annihilation of Lidice planned with systematic cold-bloodedness shocked the whole world.  After this Nazi atrocity towns and villages in USA, Australia, Great Britain and other countries changed their names to Lidice. Immediately after liberation the place of Lidice tragedy was turned into a temporary reverent site; and on June 10, 1945 it was decided that Lidice would be reconstructed in vicinity of the former village.  At the place of the former Lidice there is a museum with a permanent exposition commemorating the Lidice tragedy.

Visitors will certainly be moved to tears by a bronze memorial of 82 murdered Lidice children, which also commemorates all child victims of the war.

The lot of Lidice was not isolated; slaughtering of civilians was common during the World War II in the whole Europe. Let’s commemorate Kortelisy and Czech Malin (Ukraine), Oradour-sur-Glane (France), Marzabotto (Italy), or Czech Ležáky. But Lidice was the first; and in the eyes of the world public the village therefore became a symbol of the battle against German Nazism.