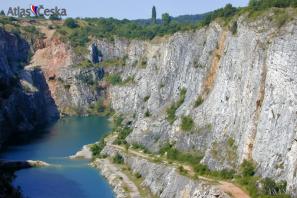 ‘Amerika’ is a name for a system of long-abandoned limestone pit quarries up to 60 meters of depth, some with deep, blue lakes, others interconnected by ingenious system of galleries and tunnels.  In some quarries production used to take place on five levels; the main adit is 3 km long.

‘Amerika’ quarries are situated next to the village Mořina in the landscape protection area Český kras (Bohemian Karst), in vicinity of the castle Karlštejn.  The best known of all and the most sought-after respectively are Velká Amerika, Malá Amerika and Mexiko quarries (Grand America, Little America, and Mexico) and several other quarries of various sizes hidden in the woods.

Recently used names of quarries were created by campers, who had fallen in love with this rough place, sometimes nicknamed the Czech Grand Canyon. They loved especially clear water in the lagoons and the white rocks surrounding them, wandering in the adits and tunnels, and danger lurking literally at every turn.

Stone mining in the ‘Amerika’ locality has a long established tradition.  Limestone mining in this locality began already in the beginning of 19th century.  After the World War I, with construction and manufacturing industries developing, also demand for building materials increased; this necessitated faster supply of stone.  That is why the mine railway was constructed.

The railway connected a stone crusher and a shipping room with the then bottom of the Velká Amerika, and Mxiko, Azurové jezírko (Azure Lagoon), and the Zasypaný (Filled) Quarry; at the same time adits were being driven. Stone was transported in mine wagons drawn by an electric locomotive. Assuming that one wagon could take about 1 m3 of stone, some 1 million wagons must have made their way through the main adit towards a limekiln; the last one of them is exposed in the window above the Azure Lagoon.

With time progression of mining increased due to mechanization; no longer there was a need for numerous small quarries.  Deep mining was applied and mining works moved to Malá Amerika, Mexiko, and, namely to Velká Amerika.  With development of motor transport the era of railway in the quarries Amerika was over. All mining works moved to Velká Amerika; in the east end of the quarry an entrance tunnel was built.  Mining in the Amerika quarries was terminated in 1960s.

The locality Amerika, which is easily accessible by car as well as by bus, is know and popular for several reasons.  It is an important paleontological locality; the most significant wintering grounds for bats in Central Bohemia; a place frequently chosen as the scenes for films and fairytales (e.g. The Lemonade Joe or the Horse Opera; The Little Mermaid); a locality with natural caves; area suitable for diving, and one of the first naturist places in the Czech Republic.

Karlštejn, a Gothic castle which is towering above the Berounka river on a huge ...