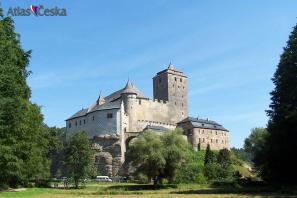 The medieval gothic castle named Kost is one of the best preserved and the most visited castles in Bohemia. Its attractivness is added to by the fact that it lies in the fascinating landscape of the Czech Paradise and, unusually, it is built not on the hill but in a valley, hidden by forests. I t is thought that the castle was founded by Beneš of Vartemberk before 1349 and then radically rebuilt after 1370 by Petr of Vartmberk. There then followed a  quick succession of aristocratic owners, some of whom contributed to the image of the castle. The castle has an extremely colourful history, including fires and reconstructions all of which you can learn about on the tour of the castle.

The tour is divided into two parts - first one is devoted to the famous Czech Kinský family and the second is entitled Torture and focusses focused on the criminal law of the 16th to the 18th century. Perhaps the biggest attraction of the tour is the five-storeyed residential tower, called the White Tower, which has a trapeziodal pattern. The irregular pattern of the castle was used as a protection against volleys from the besiegers` cannons and many visitors like to hunt for the specific spot from which you can all four castle walls at the same time!

We offer stylish accommodation in a newly reconstructed and spacious cottage situated in a ...

A comfy apartment for four people situated in the heart of the natural protected ...

The bizzare ruins of Trosky castle are situated about 9km south-east of Turnov, the ...

Dětenice, a Baroque chateau is located in a small village of the same name ...