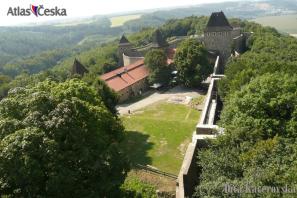 The spreading ruins of the Helfštýn castle are situated 4 km far from the town Lipník nad Bečvou on a hill towering above the Bečva River.  Originally, the castle was founded by a Silesian knight and occasional robber Helfried (Friduš) of Linava in the late 1270s.  As the castle owners often changed, it kept changing its appearance and, above all, its size. After the battle at the White Mountain the castle was seized; it lost its housing function and became only a military basis.  During the Thirty Years’ War its nine-meter-thick walls with five gates and nine bastions withstood attacks of Danes and Swedes; nevertheless, in 1763 the castle was abandoned for good.  In 1817 the castle was intentionally demolished; in 1945 it became national property.  Today visitors may admire e.g. the extensive system of fortifications, remains of late-Renaissance palace in the fourth court or adjacent baileys.  At Helfštýn various cultural events take place; the most important one is certainly the August Hefaiston Festival, an international gathering of art blacksmiths.

The first Jewish settlement in Hranice dates back to the beginning of the 17th ...

The Jewish cemetery is located in Zborovská street, north-east of the synagogue. It is ...