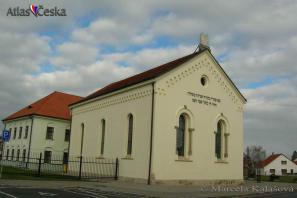 The Jewish settlement had had a long tradition in Heřmanův Městec, a small town in the Pardubice Region. The settlement was first mentioned in the 15th century. In 1686 a plague epidemy wiped out many of the inhabitants of Heřmanův Městec and the Count of the region invited the Jews to settle down in the empty houses. The oldest chapel had changed its location several times until it ended up in today’s Pokorná street. After a big fire in the 17th century the Jewish community moved to Havlíčkova street where they built in 1760 a Baroque synagogue that was later rebuilt in the neo-Romanic style. Services took place in the synagogue until the outbreak of the World War II. As many others, the synagogue in Heřmanův městec served as a store house during the war. At the turn of the 20th century it was reconstructed and nowadays it is a truly beautiful building. Many cultural events take place in the synagogue every year.

The three-star hotel Kapitán is located by the Sečská dam. There are two and ...

The Jewish cemetery in Heřmanův městec is very old, it was founded together with ...