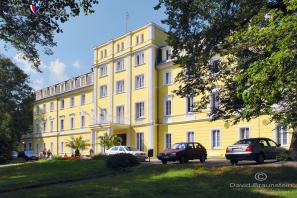 The town of  Konstantinovy Lázně is the only spa town in the Plzeň Region. The town is situated 35km north-west of Plzeň on the way to Karlovy Vary. The spa is surrounded by beautiful and almost untouched countryside. The actual place is more reminiscent of a forest or park than of a town and it provides visitors with a quiet and family-like environment. The spa specialises in the treatment of cardiovascular system and rehabilitation after heart attacks. For this only purely natural resources, especially mineral carbonic water, is used.

The town was founded in the 16th century when the spa spring was discovered. The village was named after its owner Konstantin from Lövenstein. The spa as such was established in 1809. Johann Josef Nehr, a doctor from Klášter v Teplé, recommended the local mineral water for spa purposes. The first spa building was built in 1812. During the 19th century the village experienced a proper spa boom and many new spa centres were built. The main spa building received its appearance as we can see it today in 1928.

The spa season usually starts on the fourth Saturday in May. During the season a large number of cultural events take place in the town. For sport seekers there are 450 km of cycle paths and hundreds of kilometres of well maintained footpaths.