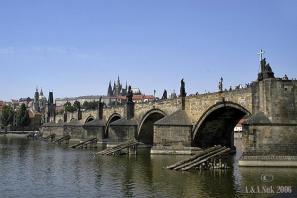 The Charles Bridge is the oldest preserved Prague bridge that still serves its original purpose. It connects Mostecka street in the Lesser Quarter and Krizkovnicke Square in the Old Town. It arches not only over the Vltava river but also over the mill supply flume at Certovka (Devil River) and Kampa island. The foundation stone was laid by Charles IV. on 9 July 1357. The construction of the bridge was finished in 1402. The Charles bridge was designed according to the plans of Petr Parler using the cuboidal technique and consists of six arches. The bridge is 515m long and 9,5 m wide. At both ends there are watchtowers with gates. In Mala Strana (The Lesser Quarter) it is the Malostranska bridge tower (the smaller tower was part of the Judith bridge that was destroyed in 1170) and on the opposite side it is the Old Town tower. The walkway and one arch are decorated by statues. The bridge has been seriously damaged many times since it was built. It is one of the most beautiful architectural jewels in the whole of Prague.