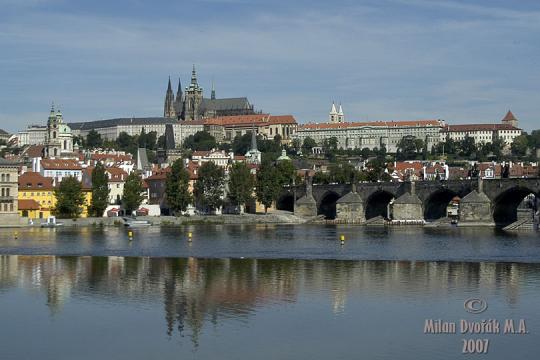 Historical Prague simply cannot be equalled not only in the the Czech Republic but in the whole of central Europe. Its architecture reflects 1100 years of development in which all styles of architecture are represented. In times of gothic, reneissance, baroque as well as the period after World War I,  Prague architecture belonged to the very best the Old continent had to offer.  Thanks to a great number of golden spires and domes of churches and cathedrals Prague is often called „a city of hundred spires“.

The historical centre (866 ha) was added to the UNESCO World Heritage List in 1992. The unique urban entity is formed by Prague Castle and Hradčany, the Lesser Quarter with the Charles Bridge, the Old Town and Jewish Quarter, the New Town, Vyšehrad and other individual monuments.

A walk through Prague presents a great opportunity to experience all architecture styles. The city is dominated by Prague castle, a seat of Czech kings, with the gothic St Vitus Cathedral. Prague castle is the most beautiful complex in the whole of the Czech Republic. Parts of the castle not to be missed are the Royal Palace with the Vladislav Hall, a Romanic St George Basilica from 921, the Imperial Stables, Daliborka Tower, Golden Lane, Burgrave’s House of Prague Castle and Queen Anne’s Summer Palace. In the Prague Castle vicinity there is the charming Lesser Quarter with is winding streets, dark corners, churches and palaces. Nowadays it is an area where many government institutions (Senate, Chamber of Deputies, ministries) are located.

Charles Bridge with its 16 pillars is the oldest bridge in Prague. At both ends there are watchtowers with gates. In Mala Strana (The Lesser Quarter) it is the Malostranska bridge tower (the smaller tower was part of the Judith bridge that was destroyed in 1170) and on the opposite side it is the Old Town tower. There are 30 statues and groups of statues on the Bridge – for instance the statues of St. John of Nepomuk, St. Ludmila with little Wenceslas or St. Adalbert. The creators of the statues belong among the renowned sculptors such as Matyáš Braun, Josef Max nebo Matěj Václav Jäckel.

Among Vyšehrad’s highlights are the romanic rotunda of St. Martin from the second half of the 11th century and the Slavin cemetery where many famous people are buried (Smetana or Dvorak, among others) or St. Petr and Pavel Church. Vyšehrad was the original seat of Czech kings.

Prague is also a city of greenery. For instance there are a great number of gardens on the slopes under Prague Castle, a beautiful orchard between Petřín hill and the Lesser Quarter, the Franciscan garden by the Church of the Virgin Mary of the Snow, Rieger’s or Havlíček’s garden at Vinohrady.

The capital of the Czech Republic,Prague is deservedly called one of the most beatiful cities in the whole world.