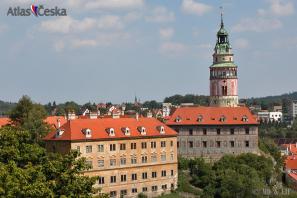 If you want to experience the atmosphere of a medieval town you should not hesitate to visit the pearl of South Bohemia, Český Krumlov. Above the meanders of the Vltava river there is a uniquely preserved historical centre that has remained essentially untouched, since the 16th century. Český Krumlov is not a large town which adds to its charming atmosphere. It has been included in the UNESCO list of the World Heritage sites since 1992.

The history of Český Krumlov started to be written in 1253 when the town was mentioned for the first time in a document belonging to Přemysl Otakar II, the Moravian margrave and Duke of Austria and Styria, the future Czech king. Throughout the centuries Český Krumlov has had many owners. When the Vitkov family line from Krumlov died out, Jindřich from Rožmberk persuaded the Czech king Vaclav II to transfer the estate to the Rožmberk family. Krumlov consequently became a seat of the Rožmberk family. Petr Vok from Rožmberk, the last member of the family, was forced to cede the town to the emperor , Rudolf II the Habsburg, due to his huge debt.  For three generations from 1622 Český Krumlov was held by the Eggenberk family. After their line died,  the town was taken over by their heirs, the Schwarzenberg family.

The town is dominated by a huge chateau and castle which is, after  Prague Castle, the second biggest chateau complex in the Czech Republic. Originally it was a Gothic castle, later rebuilt into a Reneissance chateau retaining the gothic walls, castel chapel and a Baroque chateau theatre. The historical seat of the Rožmberk family comprises a number of buildings, fancy-dress hall and a unique Baroque theatre. Attached to the castle there is a garden with a Rococo cascade fountain from the 18th century decorated with figures of water deity and the Bellarie folly with a revolving auditorium used in the summer. Among other significant monuments in the town are St Vitus cathedral and a Baroque Jesuit seminary later formed into a grammar school. The very centre is formed by the New Town Hall building dating back to the 16th century, winding little streets and more than three hundred  ancient houses of Renaissance or Gothic origin with many galleries, shops and pubs.

For culture lovers there are many festivals taking place every year in Český Krumlov, for instance the International Music Festival, Festival of old music, exhibitions in the International Egon Schiele centre or the Rose Celebration – a five petal rose is in the Rožmberk family coat of arms.

Another  focus of tourist activity is the Vltava river. Every year thousands of people go rafting and canoeing down the river as it meanders through the town and almost as many tourists watch from the bridges waiting for them to capsize!

The luxorious hotel Grand is located in the very centre of Český Krumlov. The ...

Kleť planetarium is situated south of the peak of the hill of the same ...