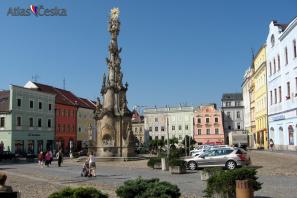 The country town Jindřichův Hradec is situated in the south – Bohemian region by the  Nežárka river and Vajgar fishpond. It has nearly 22 000 inhabitans and a beautiful historical center.

Originally it was a Slavonic castle region. In its place Jindřich I of Hradec founded a Romanesque Gothic castle, originally mentioned as far back as in 1220. Since the15th century it mentioned as Jindřichův with the town name, just under the name of the castle founder. The development ceulmination came on in the 16th century. Hradec came to be a centre of an extensive  domination and some important trading ways, connecting Bohemia, while Austria crosscut it. A large development was concerned with drapery, fishing, brewery and sheep breeding. Rennaisance buildings grew up next to the Gothic buildings and Jinřichův Hradec grew into the most populated town of the Kingdom and even the largest liege town in Czech countries, according to that area. In the second half of the 17th century it decreased its position of a centre gradually.

The most beautiful historical monument of the town is a Gothic – Rennaisance chateau of the same name. Some parts of the ramaparts have been passed on. Historical merits of the town are a trapezial square, which dominates The Holy Trinity pillar, teemed with  a number of mostly Gothic (of the 14th century), but also Rennaisance houses (of the 16th century). Other important things to see are the Gothic church Saint´s Mary´s Ascension of the year 1370 and Jesuit schools. Opposite the school is situated the former Jesuit seminary is a museum nowadays, best-known exhibit for having the world-largest national mechanical Christmas crib. An outstanding architecture view point  of the historical merits is the Minory Monastry with early-Gothic monastery church of Saint John Baptist, which was founded in 1260.  There is also a Jewish cemetary dated back to time before 1440.

A curiosity of the town is a narrow gauge railway going to Nová Bystřice,which was finished in 1897. It is 33 km long  and is still in service. Jindřichův Hradec has also been the first town where lighting has been provided by electricity.