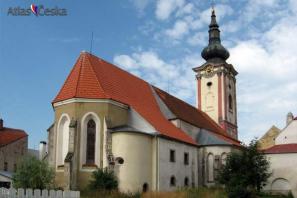 Nová Bystřice is a small town with ca 3,000 inhabitants, located in the region Jindřichův Hradec close to the Czech-Austrian border.  It is a terminus station of narrow-gauge railway dated 1897 leading from Jindřichův Hradec.  The historical center of the town is listed as historical town zone.

The original village stood about 1 km from the present site of the town, near a trade route.  The village is first mentioned in 1188.  The area was colonized by Maltese Knights as a part of the slave county.  The area fell to the Czech Crown in 1282 when it became property of the powerful South Bohemia-based Vítkovci family, and, specifically, Sezema of Landštejn, who founded a castle here.

In 1348 when Vilém of Landštejn became a counselor of Charles IV, a regional governor for Moravia, and a Prague burgrave respectively, Bystřice was developing quite significantly.  In 1341 the village was promoted to a town.  In the period 1381-1575 the town belonged to the family Krajíř of Krajek.  Due to their Catholicism the town was burned down by Hussites to such an extent that it had to be built all over again.  Its name-Nová Bystřice-dates back to this period, too.  The Krajíř family died out on the spear side in 1575.  The county was then owned by the Lobkowitz and the Kinski family.  In 1615 Bystřice region gets to the Slavata family.  In the period 1870-1939, in connection with industrialization, numerous local families left the country and moved to Vienna or America.  Number of inhabitants rapidly decreased in the region.

In the Communist era due to its location near the Czech-Austrian border Bystřice did not have good times.  But it changed in 1989 when the town finally saw beginning of its development related to tourism.

In the center of the town there is an oblong square with a Baroque fountain and a Marian pillar dedicated to the Holy Trinity erected in 1679 to express people’s gratitude for the end of plague epidemic. The chateau located near the square used to be a castle in Gothic style, which was redesigned in Renaissance style, and, later on, extended in Baroque style.  The oldest, still surviving part of the chateau are the cellars in the basement of the chateau.

The originally Gothic church of St.Peter and Paul was burnt down in the 17th century; then it was rebuilt into its present Baroque appearance.  The wall paintings inside the church originate from the first half of 14th century.  The small Renaissance church of St.Catherine dated 1585 represents another sacral building in the town.
On the southern outskirts of the town remains of the former town walls can be found.

The narrow-gauge railway running through so called Czech Canada from Jindřichův Hradec to Nová Bystřice is a great local attraction.  It was open on November 1, 1897; it is 33 km long, and the gauge is 762 mm.  There are two types of wagons operating there: modern ones from 1958, and old wagons drawn by a steam locomotive from 1907.