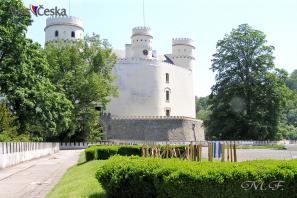 The castle, and later on the chateau, called Orlík had been rising on the high hill above Vltava river for centuries. However, after the rising of the Orlik dam, the valley under the chateau has been deluged and the water-level in the reservoir reaches closely under the chateau´s walls. Orlík was originally founded as a king´ s early Gothic castle in the 13th century. It was an important supporting spot of royal power in the region and was also instrumental towards the near ford security. After the Przemyslaw dynasty died off, a number of noble clans resided in the castle (for instance the Schwambergs and the Eggenbergs). In the 16th century Orlík got the Rennaisance chateau appearance. In 1719, Orlík became the property of the Schwarzenberg family. In the second half of the 19th century, after being rebuilt, Orlík was changed and got its romantic Gothicism appearance.

Four wings which close the courtyard, form the castle. It is surrounded by an extensive English park. The compartments richly furnished by Schwarzenbergs, are an excellent illustration of the noble life-style in the 19th century. The chateau is noted for its ample collection of guns, which belonged to various notables. The gun collection numbers over 300 items. A library counting 18 000 books is interesting as well. There is also the Napoleonic furniture in the chateau. Close to the chateau is the  pseudo-Gothic tomb of the Schwarzenbergs. Orlík is one of the most frequented chateaus in the Czech republic, due to its combination with the dam, which provides various ways of recreation.

The Early – Gothic Zvikov castle is situated above the joining of  the rivers ...