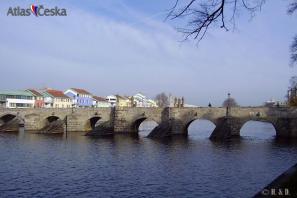 Písek lays on the Otava river in the south Bohemian region. It is an important, cultural, clerical, traffic and tourist centre of the territory. The town with fewer than 30 000 inhabitants has got a very rich history. It dates back to the early Middle – Ages, roughly to the 13th century when Písek came into being as a settlement near to the paddy – fields of gold sand on the left bank of Otava river. In 1254 Przemysl Otakar II founded a king´s town. The town was founded for gold mining only. It was also to protect the Gold trail, which passed Otava river here and also should had been the foundation of the king´s  power in the region. Above the ford over Otava river was built a castle, a monastery, a decanal church and a stoney bridge with seven arches, the second oldest in the middle Europe still serving.

Písek remained in favour of rulers even after its Przemyslaw dynasty died out, the kings Charles IV and Wenceslaus IV resided here often. The town remained in hand of the Crown for all the time, but its significance began to decline gradually. Since the 19 th century the appearance of the town has absolutely changed. In the periphery of the town are streets full of tenement buildings and the Czech language has predominated at the town hall, the cultural institutions and associations have  risen and Písek has been called a town of schools and students. Písek was a holder of the largest municipial domination in Bohemia, above all of forests, for centuries.

Písek has got an extensive square. The rummages of the municipial fortification have been preserved up to this day. The castle in Písek, founded together with the town is a significant monument of Czech early- Gothic architecture. In addition to the aforementioned bridge, the view point of Písek is the decanal church of the Virgin Maria Birth, which was founded at the same time as the town. There stands a baroque town-hall of the 18 th century and the Saint Mary´s pillar at the square. In the castle there is a museum with an exhibition about gold-mining in the Písek´s region.