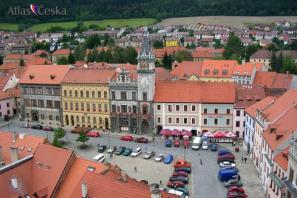 Prachatice is a country town in south Bohemia which has nearly 12 000 inhabitants and is situated about 40 km west from České budějovice. The centre of the town with its Rennaisance buildings have been declared a town monumental reservation.
Prachatice has a rich history, which is linked to the „Gold Trail“ raised for transport of salt to Bohemia. This medieval trade route crosscut Prachatice. The first reference to the municipality occurs in the second half of the 12th century, when the Czech prince Vratislav I dedicated Prachatice to the hands of the Vyšehrad chapter house. The town had an important position for salt transport which is why it was rich. The rulers gave attention to the town, what exemplifies an order edited by Wenceslaus IV. According to this order, all goods transported from Bavaria had to pass through Prachatice. The economic growth of the town was stopped by the Hussitism wars. From 1436 to 1848 it belonged to feudal clans – the Rosembergs, Eggenbergs, Schwarzenbergs. In the period of the Rosemberg (the 16th century),  started the biggest expansion of the town.. The last member of Rosembergs clan – Petr Vok, gave Prachatice to the emperor Rudolf II in 1601 and the town became the king´s again. After the Thirty Years War, when Prachatice was captured and degraded of all acts of grace and possessions, the town started to decline. This lasted until the first half of the 20th century.

The rampart of the town has remained well-preserved. One of the oldest architectural structures is the Gothic Decanal church of Saint James, located in the square which was established at the same time as the town. The merits of Prachatice are a rectangular square with a public fountain and set of well – preserved Rennaisance houses. Its  view point is the pseudo-Rennaisance architecture of the new town hall, constructed in 1902-03. The worthy Rennaisance old town hall is dated back to the years 1570-71. Near to the square by a road leading to the railwaystation stands a marble sculpture – the largest sundial in the Czech Republic.

The Jindřichův Hradec Chateau stands in the town of the same name. It was ...