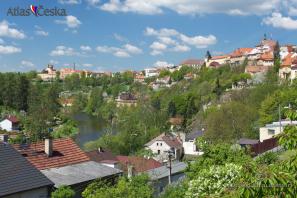 The county town of Tábor is situated on the Lužnice river in the south Bohemian province. Tábor, whose center is its historical monumental reservation, is fruitful in history linked to Hussitissm.

Foundation of the town  is joined by the year 1420 , the  Hussitism and Jan Žižka. Forward Hussittes made use of the strategical location in 1420 and after they had left Sezimovo Ústí, they founded a town here, which they called Tábor – a biblical name after a peak near Nazareth in present Israel. All inhabitans should had been equal, all the possessions should had been common. This idea lasted a half a year only, Tábor turned into a military town and power centre of Hussitissm. Hussite marshal Jan Žižka headed the town. After a butchery of forward Hussites at the Battle near to Lipany, the union of Tábor Hussites and the emperor Sigismund,Tábor was upgraded to a king´s town in 1437. The peaceful years at the end of the 15th century enabled an unusual expansion of the town. Fishpond Jordan, the first artificial lake in the middle Europe came into being while the town engaged enough drinkable water to enlarge itself in the future. After two fires in the 16th century,most of burgeous houses were burnt away, Tábor became a Rennaisance town. The Thirty Years War brought devastation and depression. An arrival of an Augustinian friary in the 17th century brought about new life. New progress of the town started in the 19th century with the birth of industry, railways and national revival. In 1878 the town museum was established, which embodies the  Hussitism period. The centre of the town has the most medieval feel to it. Sight-seeing should begin at the beautiful Žižka´s square, where Gothic and Rennaisance interfuse and also Baroque and Rococo in the appearance of bourges houses. Under the houses is situated a labyrinth of tunnels which  arose in the 16th century thanks to interconnected cellars. The labyrinth is still accesible now.

The Hussitissm museum, where expositions are placed in the spaces of late-gothic town hall,  should not be missed.  The visitors can finish the walk round the tortuous lanes of the Old Town, stepping on the only proven tower of the original castle Kotnov. Furthermore you can see a decanal church of Lord´s transfiguration, the Theatre of Oskar Nedbal and the Rennaisance water tower. A lot of cultural events take place in Tábor during the year, which include Husitism days, Pestige festivities of beer and mineral waters and a competion for The Gold Beer Seal and The  Gold Beer Well.