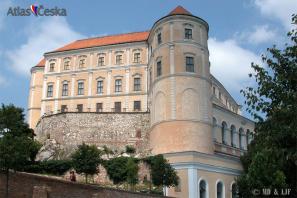 The Baroque castle in Mikulov occupies a site on the hill where there was once stood a Roman castle dating back to 1218, when it belonged to the Kounicky family. Subsequently the castle become the property of the important and aristocratic Lichtenstein family. Mikulov remained in their hands up to 1560. The castle was rebuilt in Gothic style in the 14th century. Because of its position near the southern border, which had been vunerable to Turkish invasions since the beginning of the 16th century, it was necessary to develop a strong and durable defence system – hence the huge bastions which have been preserved to this day. In 1560 the Lichtenstein lost the castle. The family of Dietrichstein became the new holder in 1575. They held the castle up until 1945 and had masterminded its transformation from the fortress to a comfortable aristocratic seat. The first reconstruction and the development of the whole manor are connected with the monarch František of Dietrichstein, the Olomouc bishop and the most powerful man in Moravia. The castle’s new appearance was in the spirit of the late Baroque. The courts changed too and the terraces, castle garden and the court of honesty came into existence. The interiors of the castle decorated important artists from the whole empire. The very end of the Second World War meant a real tragedy for Mikulov as The receding German units burnt it out. The castle ruins were reconstructed step by step to achieve the present look.

Nowadays the castle serves as a seat of the Regional Museum, which offers the exhibitions of the viticulture with a unique monumental Renaissance barrel in the castle cellar and also an exhibition describing the building development of the castle. On the premises, there is also a castle theatre and a Baroque riding hall modified for social occasions.