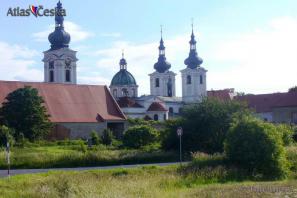 The Praemonstratensian convent in Doksany was founded in 1144-1145 by Gertrude, the wife of the Czech king Vladislav II.  First sisters in the convent came from Dünnwald, Rhineland. The convent developed considerably in 13th and 14th centuries. Despite of subsequent catastrophes striking the congregation such as fires, floods, the Hussites wars and the Thirty Years’ War the life in convent went on rather uninterrupted.  At the end of 17th century extensive reconstruction of the premises commenced; the convent preserved its then acquired Baroque appearance up to the present days.  In 19th century it was redeveloped into a chateau with utility buildings. Complex of the convent buildings surround four courts.  Visitors may admire the Church of the Birth of Virgin Mary with valuable Baroque decorations and a 12th century crypt.

Hotel Roosevelt is situated in the historical town of Litoměřice. There are 32 rooms ...

The comfortable hotel Lev in Lovosice, a small town in the Czech Middle Mountains, ...

The Libochovice chateau is a dominant feature of the small town of the same ...