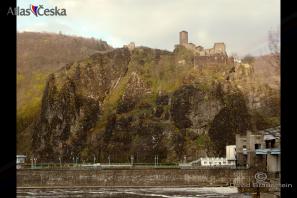 Střekov Castle is one of the best preserved castle ruins in the Czech Republic. It was built on an inaccessible rock, high above the right bank of the Labe river, approximately 2,5 km from the city of Ústí nad Labem. king Jan Lucemburský had it built to protect the Labe passage, an important business route.

The castle was left to its fate in the 17th century, to be discovered again by the Romantics two centuries later. The castle was mentioned for instance in Richard Wagner’s and J.W.Goethe’s letters. From the castle there is a great view of the whole Labe valley and the city.

Short-term and long-term lease beautiful romantic suite of rooms in the centre of ...

Hotel Roosevelt is situated in the historical town of Litoměřice. There are 32 rooms ...

The comfortable hotel Lev in Lovosice, a small town in the Czech Middle Mountains, ...

The two-star Hotel U Kaple is situated in a very quite part of the ...