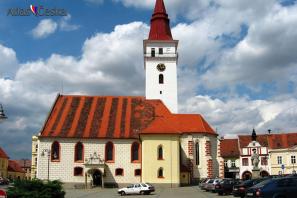 Jemnice, one of the oldest Moravian cities lies in the south-west from the district town Třebíč. The town was established in 1227 as royal on the crossroads of business routes at the wade over Želetavka stream on the gold and silver strata. Together with this, the castle was probably built too. The periods of blooms changed periods of decline, the manor changed its holders often.

The centre of the city is a town monumental zone and you can see there a number of monuments. In Jemnice there is one of the oldest Jewish communities in the Czech Republic. The major part of the houses and the gate have been preserved within the Jewish quarter. The oldest tombstones on the Jewish cemetery come from the 17th century. In the town, you can see round Roman tower of St. Jacob Church - the oldest building in Moravia. The most famous dominating feature is the Renaissance castle, which was built in the place of former castle in early 17th century. Jemnice becomes every June a scene of Barchan, one of the oldest historical feasts in Europe and its origins date back to the period of the King Jan Lucemburský.