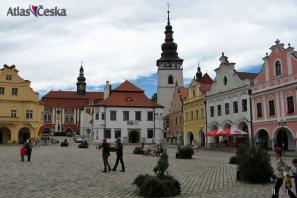 Pelhřimov is a district town in the Vysočina region. The ancient small town lies in the valley of the stream Bělá. The history of the town has its origins in the 12th century. The town was the property of Prague Bishops. After its destruction it was renewed by Tobiáš of Bechyně and German settlers in 1295. The economic development, which was otherwise limited by the long distance from the business routes, was favourably influenced by silver mining in the neighbourhood of Vyskytná a Křemešník. Another advantage for the town was that it gained many liberties from its proprietors, Prague Bishops. It was the business centre of its neighbourhood, the crafts like clothing, lining, weaving and gingerbread factories were developing in the town. Pelhřimov was promoted royal town in 1596. Because of the fires, Pelhřimov has unified its Renaissance-Baroque appearance. The 19th century was very important with regard to the development because of industry bloom, especially in the areas  of brushwork, knitting and starch industries.

Pelhřimov centre is Town monumental reservation. The town is also called Pelhřimov-the city of records, because there is a permanent museum exhibition of various records.

Želivský monastery is one of the three oldest monasteries in our country. The monastery ...

Roštejn castle is a preserved Gothic-Renaissance castle, which lies not far from Telč. The ...