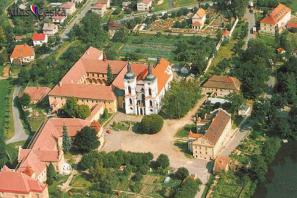 Želivský monastery is one of the three oldest monasteries in our country. The monastery was established together with monastic Virgin Mary’s Birth Church in the first half of 1139 by Premyslid Prince Soběslav I and his wife Adléta for the Monks of St. Benedict order. After ten years the Benedictines were replaced by the order of Premonstratensians, who stayed there up to today. After the fire in 1712 G. Santini, who has also made the reconstruction of the Church in Baroque-Gothic style, renewed the buildings. In the second half of the 20th century the communists used the monastery as a prison. Important members of the Czechoslovakian Catholic orders were illegally interned there. Nowadays it is the property of the order again.

The main building of the whole complex is the monastic Virgin Mary’s Birth Church with two towers. On the bottom of the Roman basilica from the first half of the 12th century was built a Gothic temple in early 14th century. Baroque convent and new Baroque prelature and abbey belonging to the premises.

The late-Classicist chateau is the dominating feature of Kamenice nad Lipou in the Vysočina ...