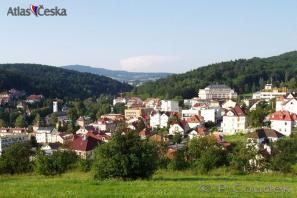 Luhačovice is a health resort in the Zlín region of South East Moravia. It lies in the White Carpathians protected scenic region on the stream Horní Olšava, 16 km southeast of Zlín. Luhačovice has about 5500 inhabitants and it is the 4th largest spa in Bohemia and the largest one in Moravia. People with respiratory system diseases, digestive disorders and obesity problems are cured there. The high reputation of the spa town comes from the 6 natural and tens of artificial wells which are located there, the most famous and most important of which is the Vincentka spring.

The first traces of Slavic settlement in this region  can be datedback to the 7th and 8th centuries. The first written reference about the village comes from 1412, when the commune was gained by the Šternberks, who were settled in Lukov. In 1590, Luhačovice came into the hands of Bartodějský family from Bartoděj. After the battle of Bílá Hora, the estate was confiscated and acquired by Maxmilián from Lichtenštejn, who sold it in 1629 to Gabriel Serenyi, in whose family it remained until 1945. In 1736, the Serenyi family built a Baroque castle there. The Spa Theatre and the secession house of Bedřich Smetana came into existence in early 20th century, it is also the period, when peat and sulphur spa were opened. Luhačovice was proclaimed a town in 1936. The most monumental building of the Spa Square is the Colonnade with the Amandka and Vincentka springs. The Colonnade is 130 metres long and 13 metres wide. Besides the spa procedures, Luhačovice offers many possibilities for sports, walking and cycling or just a cheerful holiday at the lake, because the nearby Pozlovická reservoir offers a wide variety of water sports. The neighbourhood of Luhačovice offers very good conditions for cross-country and downhill skiing in winter.