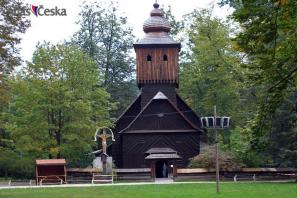 Rožnov pod Radhoštěm is a town with about 18000 inhabitants and it is situated at the foot of Vsetínské vrchy in Zlín region. The town, which used to be constructed from wood, stretches along the river Bečva in the Beskydy protected scenic regionn.

Rožnov pod Radhoštěm was established in the middle of the 13th century, The layout of the town is typical for the period of its formation. In the second half of the 13th century, towns used to be founded anywhere, from nothing. That´s why the houses on the square were built in straight lines and the arcades rest on columns with galleries.

In 1548, the manor was taken over by the Žerotínové family, who held it until the 19th century. During their rule, Rožnov experienced the prosperity of economy and crafts. Žerotínové contributed to the prosperity of the town and Rožnov became famous throughout the whole Austrian monarchy thanks to cloth and muslin making. As a result, the building in the town were slowly changing from wooden to stone. Although crafts were developing, most of  the inhabitants were still living off low-yield agriculture and pasturage. The settlers were called Wallachs, the whole region Wallachia and most people connect this region with flocks of sheep!

The spa life of the town started in 1796, when doctor from Brno, dr.Korčák noticed local favourable climate conditions and decided to send there his patients with mammary diseases. During the early part of the 20th Century, more than 3000 guests from all over the world came to Rožnov during one spa season. They included for example Sigmund Freud, deep-psychology founder and Georg Mendel, founder of genetics, who experienced the effects of the treatment too. the spa was closed in 1960 and in the second half of the 20th century the town changed its character and becomes an industrial city. Today the visitors are attracted mainly by a the beautiful scenery of the Beskydy mountains and the largest Czech open-air museum, the Wallachian Museum A town with an interesting history – definately not to be missed!