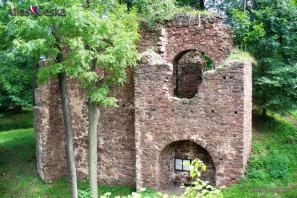 The ruins of this early-Gothic castle founded by Herbort of Chlum are situated in the Osoblaha Spur, municipality Bruntál, the Moravian-Silesian region.  In 1476 it was taken and damaged respectively by Matyáš Korvín.  Subsequently housing premises of the castle were rebuilt into a square-plan Gothic-Renaissance palace with four towers in the corners.  During the Thirty Years’ War it was destroyed by Swedes.  The ruins open to the public include remains of castle fortifications and a round tower, bastions and outer walls of the palace.  Visitors may admire also the well-preserved systems of outer fortifications with massive ramparts and water barriers.