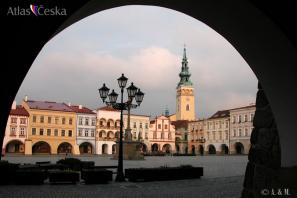 The county town Nový Jičín in Moravia-Silesian region is certainly rather surprising experience for an unprepared visitor.  He can encounter a historical town of unusual beauty located on the southern border of the Moravia Gate, surrounded by picturesque nature.   In the town upon the river Jičínka one gets taken by the atmosphere of olden days, hospitality, and ever-present quiet enjoyed greatly by almost 27 thousand of town’s inhabitants.  The historical center of the town dominated by a regular square-shaped square is listed as historical town reserve.

According to the town’s appearance one can tell it was built “on green field” site.  Nový Jičín always had regular square and rectangular shape.  Also, the town fortification system was almost rectangular.  The town was funded in 14th century i.e. the period of reign of the Luxembourg family.

In 1313 the king Jan of Luxembourg (John the Blind) issued a document, in which he granted the town a right to collect duties and a toll. This document is the oldest written record of the town.   Advantageous location of Nový Jičín at the crossing of important trade routes had positive impact on development of the town.

The town belonged to the Lords of Kravaře until 1434; after this date it had various owners.  In the period 1500-1558 Nový Jičín was property of the Žerotín dynasty.  Under their rule the town was developing and growing rich respectively.  They rebuilt a Gothic fortress of the Lords of Kravaře and turned it into a comfortable residence, Žerotín Chateau, in Renaissance style; after a devastating fire, when original wooden buildings were burnt to the ground, they initiated construction of numerous stone houses on the town square as well as the Town Hall.  Their reign was also significant in development of crafts. The town treasury collected money from cooks and brewers, and, above all, cloth makers.  Regarding cloth industry Nový Jičín became the second most important manufacturer within Moravia (Jihlava was No.1).  Thanks to this fact in 1588 the town was able to buy itself out of bondage from the Žerotíns, and it became a chamber city i.e. it was responsible only to the Royal Crown.  At the end of 16th century, when many Germans had moved into the region, most of local inhabitants converted to new, Lutheran persuasion.  In 1620 the king Frederick Palatine promoted the town even to a royal city; this was the time Nový Jičín was experiencing its (last) heyday.  After the battle at the White Mount (November 8th, 1620), it lost its independence and became a tributary town again.  Nový Jičín was assigned to the Jesuits in Olomouc and remained in their possession until 1773 when the order was dissolved.  In this period the town also saw recatholization.

Appearance of the town was also influenced by two disastrous fires in 1768 and 1773 respectively burning down Baroque burgher houses; the town was than rebuilt in neo-classic style.  With dissolution of the Jesuits order, and thanks to administrative reforms in 19th century, Nový Jičín started redeveloping and became the center of the region.  Industrial revolution introduced textile industry to the town, and, later, also hat manufacturing, which put Nový Jičín on the map.  Nevertheless, the town could have been even more prosperous had the importance of railway not been underestimated.

Nový Jičín is, above all, historical-sights destination.  The most beautiful ones include also the Žerotín Chateau in early Renaissance style, which hosts the Museum of the Nový Jičín Region today.  It presents permanent exposition of hats providing complex overview of history of hat making in the town.  In the heart of the historical town reserve there is a square-shaped Masaryk Square with burgher houses showing impressive fronts in combined styles.    Other interesting buildings on the square include The Old Post Office, the house At the White Angel, the house of General Laudon, and, last but not least, the Town Hall (rebuilt numerous times).  In the center of the square there is a Plaque Column bearing a statue of Virgin Mary, and a fountain with a statuary ‘Dancing Farmers’, in traditional Kravaře costumes. Well preserved arcades running along all four sides of the square together with a late Gothic tower of the parish church dedicated to the Assumption of the Virgin make the general picture of the square complete.  Also location of the town contributes to its attractiveness: deep forests at the foothills of the Beskydy Mountains are only a stone’s throw from here.  And those preferring sight-seeing can visit nearby towns Štramberk and Příbor, or the Hukvaldy Castle.