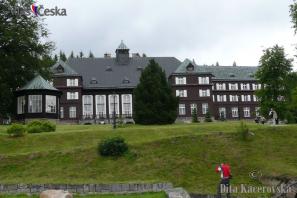 Spa Karlova Studénka is situated in the Bílá Opava river valley in the Hrubé Jeseníky mountain range on the eastern side of Praděd (1492m). Surrounded by beautiful countryside and deep forests it is by by many it is consideed the most beautiful spa in the Czech Republic. It is said that in Karlova Studána there is the cleanest air in the whole country. The spa resort  focuses chiefly on those with asthma, respiration and imminutity problems. For treatment mainly the local natural springs, carbon dioxide, peat and the unique local clima are used. Lipová-lázně is also an ideal place for wandering in the mountains, cycling or skiing.

The area belonged for centuries to theOrder of German Knights. Those responsible for founding spas as such were two grandmasters of the order, Maxmilián II František (Maria Theresia’s youngest son) and Karel Ludvík. Karel, after who the resort got its name, was a commander in the Habsburg army. The first spa resort was built in 1785. In the 19th centry Karlova Studánka became one of the most popular spa destinations in the whole Empire.

The Bruntál Chateau is in situated in the very centre of the town. Originally, ...