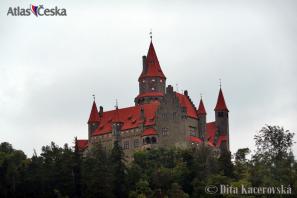 Bouzov castle towers over a village of the same name in the central part ofMoravia. The castle was founded in the 14th century, however, its original Gothic appearance was changed at the turn of the 19th and 20th centuries into a Romantic one.
After being built the castle changed hands quite frequently. It is quite likely that the Czech king Jiří from Poděbrady was born here. In the first half of the 15th century it was a Hussite stronghold. During the thirty-years-war it served as a prison for caputred Swedes. After the war it was bought by the German Knight Order, to whom it belonged until 1939 when it was confiscated by the Fascists. Bouzov castle was given to R. Himmler as a present by A. Hitler. Nowadays the castle belongs to the state.

Bouzov is one of the most frequently visited Czech castles. The most precious part is the neo-Gothic chapel with its Gothic altar and tombs. The castle is very often used by film makers and many famous fairy tales have been filmed here.