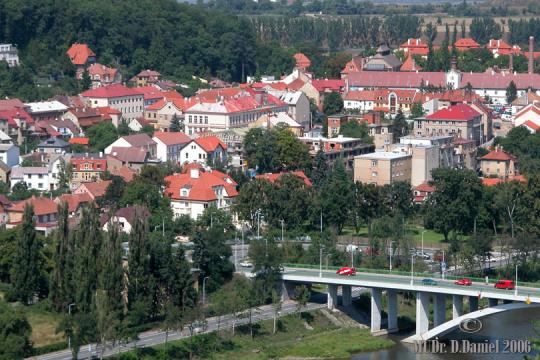 Zbraslav of today is a municipal district and cadastral area located in the south of Prague; it forms a part of Prague District 5.  In the not-so-distant past it used to be an independent town with a rich history though.  Almost the whole district is situated between the left bank of the Vltava River and the right bank of the Berounka River, close to their junction.  Being a very favourable place to settle at, indeed, people kept settling in the area since the oldest times; a Celtic oppidum at Závist, which ranks among the largest ones in Europe, and remains of which we can see up to the present, serves as evidence.  First record in writing dedicated to this place dates back to 1115 when Zbraslav was referred to as property of the Kladruby Monastery.  In 1268 Zbraslav was acquired by Přemysl Otakar II.

Přemysl Otakar II liked the location at the junction of the Berounka and Vltava Rivers as well as surrounding extensive, thick forests full of wildlife so much that he founded a hunting manor there.  He had the hillsides in vicinity planted with vineyards.  In 1292 Wenceslas II, a son of Otakar II, promised to build a cloister and a cathedral here, which was supposed to be a burial place for Bohemian kings and their families.

He chose the Přemysl’s hunting manor in Zbraslav as the most suitable site for the project.  The cloister was built for Cistercians, who were called from Sedlec near Kutná Hora in 1292.  Wenceslas II named the new cloister Aula Regia.  Since that time the history of Zbraslav has been connected with the history of the cloister.

Alike his father Wenceslas II liked the place; it also played a significant role in his coronation when the foundations of a gothic cathedral were laid.  The cloister soon became a center of home as well as foreign policy of the Czech state.  Abbots of the cloister were the most important prelates in the country; their relationships with the dynasty were very close.

The first abbot Konrád II had a great influence on Wenceslas II; and it should not be considered coincidence that Cistercian prelates, abbots Petr of Aspelt and Heidenreich from Sedlec, happened to be the originators of appointment of Jan Lucemburský (John the Blind) to the Czech throne. Zbraslav cloister is also associated with one of the most important written documents of Czech medieval history - the Chronicle of Zbraslav in the period 1305-1339 written by cloister abbots Ota and Petr Žitavský.  The reign of the first two kings of Luxemburg dynasty, John and Charles IV, was considered a golden age for the cloister. Development of the cloister continued; its privileges were acknowledged; several more villages became a part of cloister property; and the cloister was also freed of taxes.

At the time there were about 300 monks in the cloister where they were fulfilling the vocations of their order, and thus participating in Zbraslav development. During almost 500 years of existence of the cloister monks occupied themselves by economics, and from related gains they maintained the cloister and sent their novices to colleges. In the mediaeval era they were copying religious books or they were devoted to music, fine art, and literature.

When Charles IV died in 1378, the fame of the Zbraslav cloister started to vanish.  In 1420 the cloister together with the cathedral were struck by Hussite wars. During looting in the cloister relics of Bohemian kings were desecrated, the cloister and the cathedral were set on fire, and destroyed paintings and sculptures were taken to Prague.  In the ruins of the buildings only a few monks eked out.  The cloister was stagnating and fate of its original appearance was sealed by the Thirty Years’ War.

The cloister rose from ashes after 1650 when the St,Jacob cathedral was erected.  At the beginning of 18th century when Wolfgang Lochner, an abbot, served his office construction of a building nowadays used as a convent according to a Giovanni Santini’s design commenced. After Santini’s death in 1723 construction of the cloister was supervised by František Maxmilián Kaňka.  During the first half of 18th century the cloister regained its importance and fame.

In 1759 the then abbot Desiderius Duchoslav Andres together with the convent entered into an agreement of lease of the building with J. B. Savani, a French manufacturer, who subsequently located a hat manufacture there. In 1764 Desiderius Andres had new buildings and a brewery building erected in Zbraslav.  In 1875 under the regulation of the emperor Josef II the cloister was closed down.  Two years later a sugar-manufactory moved into the cloister buildings, which resulted in damaging some frescoes.  In 1787 production of sugar started; but it stagnated and, after all, it was terminated.

The damaged premises were then used by the military as grain storage. In 1825 Zbraslav was bought by a prince of Oettingen – Wallerstein during whose reign the demesne developed economically a lot. In the convent the prince ran a brewery and industrial and agricultural production.  He had a one-storey house, so called Amthaus, built for his clerks.  The prince took a good care of the chateau as well as its vicinity, and, especially, palace and manor gardens.  In 1830 the prince extends his demesne by purchasing Chuchle, and has a spa resort built there.

In Zbraslav in 1835 he established a trade and industry school for farmers and craftsmen.  It was the first school in Bohemia and the third one in Europe respectively.  In 1910 Zbraslav demesne was bought by Cyril Bartoň thanks to whom the original cloister damaged by industrial production was completely reconstructed.  The Bartoňs have been the last owners of the Zbraslav Chateau; they retrieved it back after 1989.

In the former cloister building a part of the National Gallery collections has been exposed since 1939.  Today a pleasant landscape park welcomes visitors to the chateau.  In its enterable part it is possible to see numerous sculptures and statues; one of the most interesting works is a model of an equestrian monument of St.Wenceslas by Josef Václav Mylsbek (the statue is located on the Wenceslas Square in the center of Prague).  Three Baroque wings half-opened towards the south embrace a small yard.  The cloister St.Jacob Church is located between the convent and the former prelature.  In the church relics of the last Přemyslides were buried in 1991.

Advantageous location in vicinity of Prague as well as its beautiful natural conditions promoted Zbraslav as a holiday resort in the period of the First Republic (1918-1938); but the place has maintained its attractiveness up to this day.