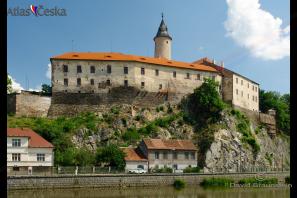 Ledeč nad Sázavou castle was originally Gothic,but was rebuilt as a Renaissance chateau in the 16th century. It is built on the rock in the town with the same name; Ledeč nad Sázavou which lies in the valley of the river Sazava. It was established in the second half of the 13th century and belongs to the oldest aristocratic seats. The family of Meziříčský of Lomnice used to be one of the holders; they have partly rebuilt the castle in Renaissance style. The wild and indebted manor was sold by Ignác of Koch to Marie Terezie in 1753; she gave it to Insolvent noblewomen institution that she established in Prague in Hradčany. In the ground floor of the palace, there are Renaissance domes. In the castle we can find the museum with collections that are dedicated to archaeology, ethnography, crafts and also numismatic collections and guns. In the former terrace garden there is early-Baroque pleasure house from the 17th century.

Lipnice nad Sázavou castle is one of the bulkiest Czech aristocratic castles. It is ...