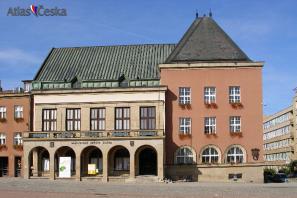 Zlín is a corporate town and the centre of Zlín region. It covers the area between Zlínská vrchovina and Hostýnské vrchy on the river Dřevnice. With its 80 000 inhabitants it is industrial and cultural centre of the region. Set in beautiful natural surroundings, Zlín remains a unique example of the architecture and urbanism of the 20th century thanks to its later development and construction, .The first written reference of Zlín dates back to 1322, when Zlín used to be the craft-livery centre of the Wallachian settlement. The town used to be a seat of manor holders and it was quietly developing. As late as the end of the 19th century Zlín didn´t differ from nearby Wallachian villages. The turning point came with the industrial revolution. Especially The year 1894 was especially important, because the Baťa family established their famous shoe factory. Rapid development of the company created a demand for more workers and consequently the building of more houses. Also the railway, which connected Otrokovice with Zlín and Vizovice, was constructed at this time. Another example of the town‘s development was the construction of the machine-works, rubber-plants and other industrial factories. Many inhabitants moved to the town, mainly from poor Wallachia, but also from the Moravian Slovak and Haná regions, on whose boundary-line Zlín is situated. Between 1910 and 1938 the number of inhabitants increased ten times from 3600 to 38000. Tomáš Baťa became the city mayor and played an inmortant part in the transformation of Zlín to a modern centre with a healthy rate of growth and excellent architecture. The town retained its position even after Baťa´s tragic death in 1932. The Second World War and the following postwar Communist revolution meant the end of the presence of this entrepreneurial family in Zlín. Factories were nationalized and operated under new name „Svit“. The town itself was renamed on Gottwaldov and kept the statute of the regional cultural and industrial centre. In 1989 the citizens voted for the original name of the town – Zlín. Baťa´s entrepreneurial tradition and convenient geographical position are the two principal aspects that supported a growth spurt of business activities, that are far superior to the Republic average. In 2000 a new university, the Thomas Bata University was founded and the town became the intellectual centre of the region.Thanks to its typical architecture Zlín became a zone of modern architecture. The visitors can admire the town hall, Zlín´s skyscraper, which is 77,5 metres high, then the former seat of Baťa´s company, Trantírkův house and Tomáš Baťa´s villa.You can visit also some historical buildings and exhibitions such as the castle, and the Empire and Classicist building is situated in the centre of the city in the middle of the park. The storeyed building with four wings and the ward is found in the middle of Sad Svobody in Zlín. Nowadays the Museum of Southeastern Moravia has its seat there. Another interesting place in Zlín is the Gothic Saint Philip´s and Jabob´s Church in the centre of the town and the Shoe Museum.

A range of other attractions are situated in the neighbourhood. Lešná Chateau with a ZOOis certainly worth a visit and real slivovitz admirers shouldn´t forget to visit nearby Vizovice, especially the annual Trnkobraní. The yearly feast of every film-fan is the International film festival for children and youth, that takes place in Zlín art studios.