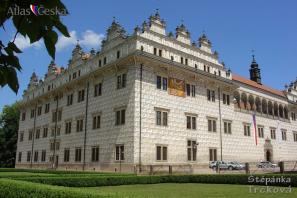 The East Bohemia region has its representative on the UNESCO world heritage list as well. It is Litomyšl castle, located 50 km southeast of Hradec Králové, on the main road to Brno. The Renaissance castle has been a member of the UNESCO family since 1999. It is the most significant Reneissance monument in the whole of the Czech Republic and its uniqueness is embodied in the beautiful arcades based on the Italian models. Despite the interior modification, particularly at the end of the 18th centrury, the castle retained its appearance from the Reneissance period including sgraffito facades and frontispieces decoration which is truly unique as its motive do not repeat. Paintings in the shaple of little love letters cover all walls of the castle. Figural scenes showing Constantin, the Roman emperor, made by the same technique have preserved as well.

The oldest mention of the existence of the castle dates back to the first quarter of the 12th century. The chronicle mentioned the existence of the castle in 981. Formerly it had been a wooden castle. Only after the Hussite wars was a new one made of stone built. In 1627 the Moravian district commissioner Vratislav from Pernstejn’s son was given the estate as a feudatory from the Emperor Ferdinand.  The new owner, one of the most powerful aristocrats in the kingdom had the castle built for himself and his Spanish wife Maria Manrique de Lara from the Mendoz lineage – Maria’s lady of the court and their 21 children. The four-wing castle consists of two floors and a square courtyard. It was built by the architect Giovanni B. Aostallini. In 1649 the Trauttmansdorf family got hold of the castle to be replaced a hundred years later by the Valdštejn family. The latest owners were the Thurn-Taxix family. The actual castle is surrounded by commercial buildings built mostly in the baroque style. The castle area is then completed by a large garden wich was built at the same time as the castle and modified in the 18th century. An amphitheater is part of the garden as well.

Litomyšl is a wonderful example of a Central European Renaissance residence which has kept its integrity despite all the changes that followed in the centuries to come. The visitors can take delight in rich interiors which are offered to them on two guided tours. In 13 halls there are collections of empire furniture from the beginning of the 19th century, paintings from the 18th.century and collections of Meissen, Viennese, and Berlin porcelain. On the first floor there is a castle theatre.

Something certainly not to be forgotten when visiting Lytomyšl is the beautiful and massive cellar with a perfect system of catacombs. As with every castle,  Litomyšl castle has its secrets. There is a creature with a weird animal around its neck on one of the sgraffitos. This by itself would not be that strange, however, there are five letters G painted above the creature. Up to the present day no one has found out why. It is said that the person who resolves the mystery will find a treasure. The treasure, based on the documents that have preserved many centuries, really exists.

The most famous of Litomyšl’s inhabitants  is the composer Bedřich Smetana. He was born in the castle brewery and his room there serves nowadays as an exhibition. Litomyšl is a cultural town, we can find here many museums, galleris, music clubs and a Museum of Czech Music. An inherent part of town is the International opera festival Smetana’s Litomyšl which takes place every year at the turn of June and July at the place where Smetana was born – the Litomyšl castle.