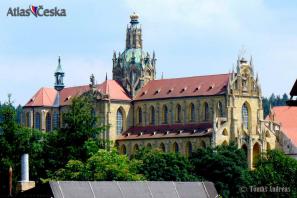 The Benedictine monastery in Kladruby is located 30 km west of Pilsen and 5 km south of Stříbro, Tachov district, West Bohemia.  Its advantageous location on the Nuremberg trail together with silver strike in the vicinity contributed to great development of the place.  In 1230 Kladruby was declared a town by the king Wenceslas I and the town thus acquired privileges such as a right to hold markets, right of capital punishment, and a right to brew).

Kladruby, one of the oldest monasteries in the former Czech Lands, was established by Vladislav I, a Přemyslide duke, in 1115.  From 12th-14th century the place was one of the most important bases of clerical power not only in the west of Bohemia but also within the entire Czech kingdom.  The monastery played an important role in the story and tragedy respectively of St. John of Nepomuk.  He being a Vicar General had come into conflict with Wenceslas IV over appointment of a new abbot for the Kladruby Monastery.

In 15th century, during the Hussite wars and subsequent fights of Jiří of Poděbrady against the Catholic and Calixtin noblemen, monastery was rifled and damaged several times.  After the Thirty Years’ War the monastery was rebuilt in Baroque style; in 1785 the place was abolished due to the Emperor Joseph’s I reforms.

From the architectural point of view, the conventual church of the Assumption of the Virgin Mary is considered the most valuable part of the complex.  Originally a Romanesque two-steeple basilica, in 1712-1728 it was rebuilt by J.B.Santini into a monumental Baroque-and-Gothic building.  Other valuable sights include the four-wing building of the new convent by K.I. Diezenhofer sheltering sculptures created by M.B.Braun; winter refectory; abbot’s apartment; library of the Windischgrätz family; and the exposition concerning John of Nepomuk.