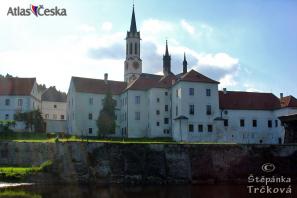 This Cistercian monastery located about 30 km south of Český Krumlov is considered a jewel of Gothic architecture.  It was founded in 1259 by Vok I of Rožmberk; first brothers came from the Wilhering monastery, Austria.  The monastery in Vyšší Brod served also as a family burial place; from 12th-17th century ten generations of the Rožmberk family were buried there including notable persons of the Czech history e.g. Záviš of Falknštejn, and Petr I of Rožmberk.  Construction of the core of the monastery-conventual church-exceeded 100 years; it was completed in 1380s.  The church shelters an altar decorated with painting by so called Master of the Vyšší Brod Altar.  In 1422 the monastery was taken-but not damaged-by the Hussites.  17th and 18th centuries were periods of development of the monastery e.g. in 1671 first church steeple was erected; in 1757 the library was built etc.  In 1830-1862 the monastery was rebuilt in Neo-Gothic style, which survived up to the present days.  In 20th century the monastery experienced two falls: it was abolished in 1941 during the Nazis occupation and again in 1950 as a part of a campaign of the communist regime against the Church; and, at last, a rise: since 1991 the monastery has been in possession of Cistercian brothers again, who have been trying to gradually resume the monastic life in the Vyšší Brod Monastery.  Among other things visitors may admire beautiful Gothic interiors sheltering a collection of paintings by famous Baroque painters such as Peter Brandl, Norbert Grund, and Jan Kaspar Hirschelly; or the Chapel of Virgin Mary with a Neo-Gothic panel altar decorated with a painting of Madonna of Vyšší Brod; or the library containing more than 70,000 volumes.

This neo-classical chateau is located in the town of Dačice in the Jindřichův Hradec ...

The south Bohemian village Holašovice, enlisted on the UNESCO list, is the best preserved ...