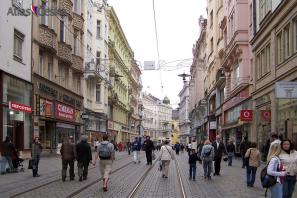 Brno, the capital of the Southern Moravian region, is the second largest town in the Czech Republic. It is the cultural, administrative and historical centre of Moravia. The town lies in the basin of the river Svratka and its population is about 366 000.

Thanks to its position on an important traffic junction, Brno has a very long history. Around the year 1000, the settlement at the crossing over Svratka river was established. Today it is called Staré Brno, and this gave the name to the town. In 1243, the seat was given many liberties by King Václav I. The defence walls, two churches and many monasteries were built. Germans, Flemings, Walloons and also the Jews started coming there and founded their communities. The Špilberk castle was rebuilt in the Gothic style in the late 13th century. In the 14th century, the political and economic importance of the town started to increase. We can find the origins of two traditions which passed on up to today right in the 14th century, when the city was developing and gaining its importance. Brno is a town of fairs and also the seat of many judicial institutions. In the first half of the 16th century, Brno started to favour  the Protestants, who gained the upper positions in city council. The reauthorization brought the new Catholic orders to the town. The Jesuits and Capuchins gained great influence during this time as well. Brno was also established as the capital of the whole Moravia. After the Thirty-Year War, it became an impregnable Baroque fortress. The position of Brno was stressed by the establishing of the Episcopate in 1777.

In the 18th century, industry and trade started to develop. This progress continued into the following century. The textile and engineering industry concentrated in the town and in 1839 the first train came there. With the development of the town, came the suburbs and it gradually lost the character of the fortress as well as Špilberk, which became a famous prison. The walls were pulled down stone by stone and were replaced by buildings and grassy areas like in Vienna. In 1850, the city joined 32 neighbouring villages, so the number of inhabitants increased to 46 000. The development of the town continued after the independent Czechoslovakia was proclaimed. The Masaryk University was established in 1919. The city stagnated under Communists.

Thanks to its long and rich history, Brno offers a range of monuments. The natural centre was formed by central Square of Freedom. The main dominating feature of the town is surely represented by Špilberk castle. You should not miss the Cathedral of St. Paul and St. Peter. There are many ancient buildings like the old city hall, the Capuchin monastery with a crypt, and Red Church and Měnínská gate in Brno. The park on Petrov or Denisovy orchards is also worth seeing. The modern architecture has its representatives; the most valuable is the villa Tugendhat, which was enrolled on the UNESCO list. A range of beautiful traditional theatres with nice buildings display the cultural character of this town. Brno became world-known thanks to its two traditions. The first of them is the Brno exhibitions and fairs, the second one its annual motorcycle Grand prix, which is held on the Masaryk circuit.