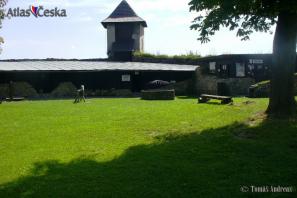 The ruin of the early-Gothic Brumov castle from 13th century is situated in the Zlín region at the Czech-Slovakian border.   One of the oldest castles in Moravia was built by Bruno of Schaumbruk, a bishop of Olomouc, to guard against raids of Cumans, Turkish nomads.  Owners of this royal property often changed, and the fortress thus changed its appearance, too, gradually from Gothic to Renaissance style.  In 1621 the castle was plundered and since then on it kept falling into disrepair.  In 1760 the castle was stricken by fire.  Its subsequent reconstruction was only provisional; soon after that the castle was abandoned for good.  Today, after reconstruction, which started at the beginning of 1970s, the ruin is open to the public.  Apart from a watch-tower visitors may enjoy exposition of history of the castle including copies of medieval arms, standards with coats of arms of former Brumov owners etc.