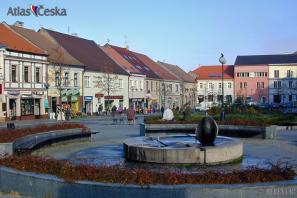 Benešov is a district town situated in the Central Bohemian region. It lies 40 km south-east from Prague. Thanks to its position  between the rivers Sázava and Vltava, Benešov and its surroundings is very attractive for tourists.. It is the cultural center of the district, where you can visit  a range of monuments,and is inhabited by more than 16000 people.
The history of Benešov dates back to the 11th century, when a feudal court and a  settlement with a church were founded on Karlov hill. In the early 13th century, a minor monastery was built on Karlov and the Prague bishop Tobiáš of Benešov became the manor holder. Soon, he built a new seat- Konopiště. The most important part of Benešov’s  history is related to the period in the late 17th century, when the aristocratic families of Přehořovský and Vrtba became local authorities. Baroque piaristic residence came into existence at that time; it used to be an important center of education and culture for the whole region. During the 19th century Benešov was underwent development. and as a purely Czech city it became a center of patriotic activities.

The most significant monument in the city is the ruin of the minor monastery. There is the gothic St. Nicholas´ Church from the 13th century on Karlov Hill and the Baroque Church of St. Anne. Tourists shouldn´t miss the secession building of the Museum and two Jewish cemeteries. The chateaus Konopiště and Jemniště are also situated in the Benešov surroundings.

Lidice is a village with 451 inhabitants in the Central Bohemia region, near Kladno, ...