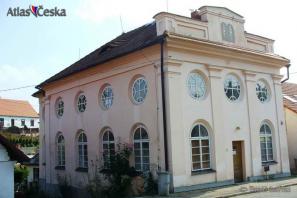 In Divišov, a small town not far from Benešov, lived until the World War II a large Jewish community. It was mentioned for the first time in 1685. The largest number of Jews lived here towards the end of the 19th century (133 inhabitants were of Jewish origin). Their built their synagogue in Šternberská street. Services took place there regularly until the 1930s. In the last decade before the war services were limited to only significant Jewish events. After the Jews were deported during the World War II the building served as a store house. It was returned to the Jewish community in 1995, nowadays there is a museum mapping the life of Jewish people in the Divišov region.