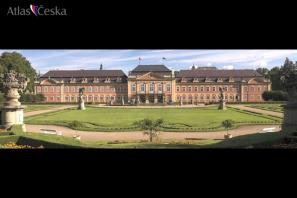 Dobříš is a large Rococo chateau located in Dobříš, municipality Příbram.  First written reference to this place dates back to 1252; 1262-1321 it was owned by the Rožmberk family, then Štěpán of Tetín.  Later on, Dobříš, the then royal manor was bought by Jan of Luxemburg, who had a castle built there.  The castle became the seat of a royal master of the hounds.   The extramural settlement became a small town, suffering a lot during the Hussite wars.  Owners of the castle were numerous e.g. the Kolovrats, Švamberks, Lobkovics, and even the Czech king Ferdinand I.  At the beginning of 17th century the emperor Rudolf II had the castle replaced by a manor hosting the district office.  In 1630 the demesne was sold to the count Bruno Mansfeld.  In 1942 the chateau was seized by the Nazis and, at the end of the World War II, by the state.  In 1998 it was denationalized and returned back to the Colloredo-Mansfeld family, and to its present owner Jerome Colloredo-Mannsfeld respectively.

The chateau is a three-winged building roofed with mansard roofs.  Interiors include eleven rooms designed in late-Baroque, Rococo, and Neo-Classical styles.  The most beautiful room is so called Mirror Hall with stucco decorations and frescoes.  In the adjacent five-level French garden in the style of Schoenbrun, Austria, visitors may find Baroque statues by Ignác František Platzer and an orangery; the English park is also worth taking a walk any time of the year.