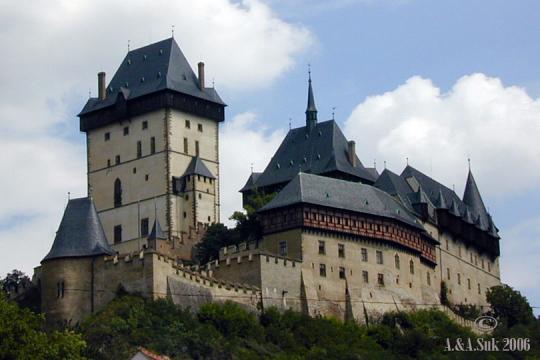 Karlštejn, a Gothic castle which is towering above the Berounka river on a huge lime stone rock, has a unique position among all Czech castles due to its historical significance, robustness and architecture. Karlštejn was not built to become an administrative centre or royal town but a place where the royal treasury as well as relics and Imperial Crown Jewels will be kept. Later the Czech Crown Jewels were brought to Karlštejn as well. The castle got its name after its founder, Charles IV, the Czech king and emperor of the Holy Roman Empire. It was built according to the plans of Matyas from Arras between 1347 – 1355. The Hussite revolution in the first half of the 15th century ended the most glorious era of Karlštejn. After the death of Vaclav IV (Charles IV’s son) Czech kings abandoned the castle for good. Only a garrison whose task was to protect the castle remained here. Consequently, the castle started to run wild. It was partly rebuilt in a late-Gothic and Renaissance style during the reign of Rudolf II. A purism alternations during which Karlštejn got its today´s appearance was carried out between 1877 – 1899.

Architectonically, Karlštejn has quite unique step-like compositinion: the lowest part of the castle is represented by the Well Tower and the Burgrave’s Palace at the main courtyard. A little bit higher stands the astonishing Imperial Palace, overlooked by the Marian Tower. The castle reaches its peak with the monumental Large Tower with the spectacular Chapel of the Holy Rood where the treasure, relices and Czech and Imperal Crown Jewels were kept. The Chapel of the Holy Rood is decorated with 130 tabular paintings by Master Theodorik – a precious unique collection preserved up to the present day. Both the walls and ceiling are decorated with golden ornamentation in which gemstones and glass lenses, epitomizing a starry night, are embed. A Karlštejn must-see is undoubtedly also the Emperor’s palace with the Knight’s hall and the Chapel of St. Nicholas, the bedroom, audiance hall, banqueting hall, and the Ancestor’s Hall with the largest gallery of Czech monarchs in the Czech Republic.

Karštejn its thanks to its location – only a few miles out of Prague – the most visited Czech castle.

Quarries at ‘Amerika’ ‘Amerika’ is a name for a system of long-abandoned limestone pit ...