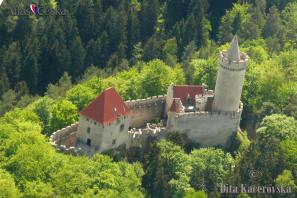 The Gothic castle Kokořín is an entrance gateway to the protected landscape area of Kokořín. We can find it 14 km from Mělník. and it was founded by a Prague burgrave Hynek Berka of Dubá in 1320. The castle experienced the rule of many holders and it was damaged during the Hussite wars. In late 15th century it was renewed in the gothic style. Rudolf II. and Albrecht of Valdštejn used to hold the castle too, but only for a short time and did not use it as their residence, so Kokořín started to fall into disrepair. Following  the thirty-year-war, Ferdinand III included Kokořín in the group of so-called cursed castles, which were not allowed to be maintained. Subsequently the ruin and, indeed, the whole region attracted the romantic poets – Karel Hynek Mácha and Johann Wolfgang Goethe used to go there often. Prague citizen Václav Špaček bought the ruin in 1894 and he reconstructed it in neo-gothic style with romantic elements.

The dominant feature of the castle is the 38 metre- high observation tower with its stone helmet and the palace, whilst the glamorous interiors of the castle are wellworth seeing.

We offer accommodation in a three-bed and four-bed apartments in downstairs of family house ...