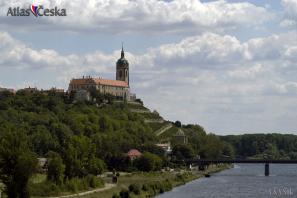 The county town Melnik is situated on an elevation in the Polabi lowland 30 km north of Prague.
This ancient royal collegiate town has 20.000 inhabitants and as a centre of an agricultural region became famous particularly cultivating grapevine and also throwing a vintage celebration every year. It is also well know thanks to the junction of the two czech  largest rivers, Vltava and Labe. Above  the junction of Vltava and Labe there already existed in the 9th century a Slovanic settlement. However, Melnik itself  grew up in the 13th century  of   the vicinity. and later  the market colony. The town doesn’t have a foundation document. So the first report according to which Melnik was considered a town appeared in a document by  Premysl Otakar II from 25th November 1274. Melnik was declared a collegiate town of the czech queens for good by Karel IV. He  had have the grapevine brought from Burgundy and Champagne and so improved the vineculture of Melnik.
The city was economically prospering thanks to its vineyards till the end of the 15th century. But since the dynasty of the Habsburks came to rule, started to stagnate and led to its degeneracy that culminated during the Thirty years war when the city was plundered and burned down. Since the end of he 18th century the city became a part of the agricultural foul territory for the Prague agglomeration and also a transit station of the distance trade and the export. It was hardly touched by the industrial revolution. The former royal collegiate  city changed into an almost provincial town.
An impressive and from far visible dominant of the city is the chateau and the tower of the minster of Saint Peter and Paul. The last ones living there were the wives of Jiri z Podebrad. Then the castle was being inhabited by various different aristocratic rod. In  1542 the castle was rebuilted into a renaissance chateau and the north wing was added with a tower and decorated cloisters ? During the Thirty Years war the chateau went rusty and in 1646 was pawned to the count of the clan of Cernin, who bought the county from  the emperor Leopold I. The last inheritrisse of the clan of Cernin Marie Ludmila  married then in 1753  August Anton Lobkowicz. The Lobkowicz family whose clan is the most wedded to Melnik owned the chateau till the arrival of the comunists. In the second half of the 18th century the interiors were arranged. In the accessed areas it is possible to see the art collection of  the Melnik stem of the Lobkowicz family, including the gallery. Since 1992 the current owner Jiri Lobkowicz  has had the chateau reconstructed.
The visitors of Melnik are attracted by the sight from the chateau  view from where you can see the junction of  Vltava and  Labe, the memorable mountain Rip and Czech Middle Mountains (Ceske Stredohori). The town can offer, besides the historical monuments, wide choice of cultural and sport activities. The romantic Kokorinsko belongs to  the most  popular areas in the Melnik district-beautiful nature, sandstone rocks and a gothic castle from  the 14th century . During the First republic a lot of administrative buildings, banks and cultural insitution were build.
But even nowdays Melnik stays more of a county where most of the people live of agriculture, as it was during its entire history.