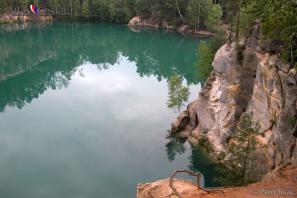 The Adršpach Rocks form a smaller part of the National nature reserve of the Teplice-Adršpach Rocks. They form a roughly triangular shape which is deliniated by the villages of Adršpach, Teplice nad Metují and the hill Čáp.The rocks are formed by thick-bedded sandstone, which has been shaped by water, ice and wind. They create a unique rock town together. The rock systems spread out in around 500 metres above sea level. The Adršpach Rocks are connected to the Teplice Rocks by a yellow tourist path, which is about 3 km long. Together with Teplice Rocks they create a complex which spreads out in the area of 20 km2.

The first famous formation is the Indian not far from the Skalní Mĕsto Hotel. From there, you can get to the entrance of the actual circuit. The circuit starts at Box Office No. 1 just outside the Lesní Zátiší Hotel or at Box Office No. 2 at the Information Centre opposite the train station. Other the formations that you will see include the Indian, the Rock Guard, and the Jug, one of the most gorgeous formations with its dolphin-shaped handle. On the right-hand side of the pathway tower there is the Giant's Armchair and the Grandmother's Armchair. The most distinctive formations in the Suburb are the Glove,the Twins in the Swaddling Clothes and the Sweetheart and the Giant's Bedroom. Towards the end of the circuit, on the way to Rerichova Rokle (Watercress Gorge) you will find the Rock Chapel dedicated to those who died tragically in these rocks. The circuit can be ended by a walk around the former Sandpit now flooded with water offering short boat trips.

The Chalet Monika provides accommodation for up to eight people the whole year. At ...

We offer accommodation in a detached house with a garden situated in the outskirts ...