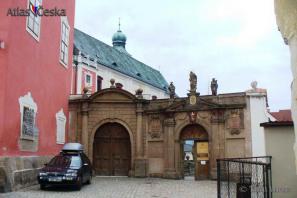 The Benedictine monastery in Broumov is such a significant architectonic and cultural complex that it was given the status of national cultural monument. It is situated in the Hradec Králové region, north of Náchod. It can hardly be overlooked as it a truly dominant feature of the town of Broumov. Its foundation dates back to the 13th century when the Benedictines received this area from king Přemysl Otakar I.  As many other monasteries it was supposed to be plundered during the Hussite wars but it did not happen. The monastery was protected by its very solid fortification. That was also the reason why Břevnov abbot decided to move here as the Břevnov monastery did not survive the attacks. The significance of the place then declined, a change came with the battle of the White Mountain and consequent growth of Catholic church power in the country. The Gothic appearance was changed into a Baroque one and in general, architectonically the monastery thrived  a great deal in the centuries to come. After the Word War II the monastery was confiscated by the state and was not returned to the Benedictines until after the Velvet revolution, in 1990. The monastery is open to the public.