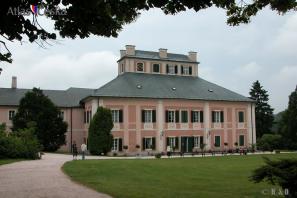 Ratibořice is an urban neighbourhood of Česká Skalice.It lies in the Náchod district, in the  Úpa river valley. The writer Božena Němcová spent her childhood here and brought fame to Ratibořice via her most famous piece, Babička, which was set in the local castle. Besides the castle itself, the most attractive places for tourists are Babiččino údolí with Staré Bělidlo, Viktorčin splav and Ludrův mlýn.

The first mansion in Ratibořice used to be a medieval fortress, which was first mentionned in 1388, in times, when it was held by some Vaněk from Žampach. Later, the small Ratibořice manor became a part of the bigger Rýzmburské manor and in 1582, both were bought by House of Smiřičtí and joined to their dominion. Since that time Ratibořice has definitively belonged to Náchod and the fortress, that lost its administrative role and gradually fell into disrepair. Náchod manor was confiscated after the battle of Bílá Hora and the House of Trčkové z Lípy became the new holder. The Emperor gave the manor to a nobleman with Italian origins, Ottavio Piccolomini, for his faithful service. The Piccolominis focused their interest on Náchod castle and as late as in 1702-1712, Vavřinec Piccolomini had a two-storeyed small baroque castle with a chapel and ground-floor servants quarters built there. This small castle should have served as a summer and hunting house, but after Lorenzo´s death it became a widow house for Piccolomini´s princesses, while Náchod remained the principal mansion house.
In 1792, the Náchod manor was bought by Petr Biron, Duke of Kuron and Zaháň. His daughter Kateřina Vilemína Zaháňská inherited Náchod manor in the early 19th century. She took a fancy to Ratibořice castle and chose it as her summerhouse, because she used to stay in Vienna during winter. Between 1825-1826 she allowed the castle to be rebuilt in a classicist and empire style. A romantic park was established in the neighbourhood of the castle and was gradually extended to the whole valley of the river Úpa. She also sanctioned the construction of a hunting pavilion and the palmhouse. The interiors were newly decorated, wallpapered and luxuriously accessorized and a brand new library, was established in the ground floor. Barunka Panklová, the future writer Božena Němcová, also had access to the library in her childhood and the  Duchess is undoubtedly the certainly „princess“ from her most famous book Babička. Among the Duchesses guests at the castle were important people such as the Austrian chancellor, Prince Klemens Metternich and the Russian czar Alexander I. In 1813 she lent Ratibořice castle to Prussian, Russian and Austrian diplomats for secret negotiations about a counter-Napoleonic coalition. After the Duchess´s death, in 1842, the large manor was bought together with 114 villages and townlets, a range of industrial plants and castles in Náchod, Chvalkovice and Ratibořice by Jiří Vilém, Imperial prince from Schaumburg-Lippe. The castle, which was rebuilt to its present pseudo-renaissance appearence, stayed in possession of Schaumbarg-Lippe ancestry up to its nationalization in 1945.

On the tour of the castle you can see both the public and private rooms which include the unique examples of the late-empire furniture in the Three emperors saloon, different sorts of musical instruments, biedermaier gentlemen´s room with a part of the library, bedroom, dressing-room and other spaces, that illustrate the life of the nobility in this period.

The hotel is situated right next to Náchod, overlooking the town. All rooms are ...

Dear guests, we warmly welcome you at the Garni Hotel Tommy, a conference and ...

We offer accommodation in a detached house with a garden situated in the outskirts ...

The mountain range of Krkonoše is situated in the Hradec Králové region, lying in ...