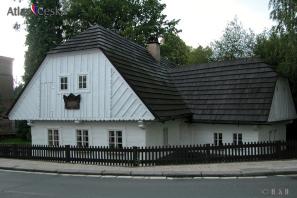 Hronov is a small town with about 6800 inhabitants which is situated in the north Bohemia and which belongs to Náchod district in Hradec-Králové region. It lies in a colourful landscape on the river Metuje at the borders with Poland. Hronov is famous especially thanks to its well-known townsmen Alois Jirásek and Josef Capek.

The origins of the town date back to it being established as a water fortress probably in the second half of the 13th century. During the Hussite wars, Hronov was on the side of chalice, during the Thirty-year-war he experienced the same end as similar cities - it was plundered and burnt out. Most of the inhabitants lived off the land and from cottage industries such as weaving but with the construction of railway from Chocen to Broumov in 1875, the region began to experience a mighty development in the textile. A spinning-factory and several mechanic weaving factories were built in addition and the engineering industry also saw rapid development.

The achievements of the town‘s two most famous citizens are honoured throughout Hronov. The main building in the square is the Jirásek Theatre which hosts the Jiráskuv Hronov festival every year, and now also houses the new multipurpose Josef Čapek hall. Over the bridge across the river Metuje, in the place of a former medieval water fortress, there is the Free Court which is a valuable example of folk architecture in addition to the Jirásek native houses which date back to the end of the 18th century. In a nearby park, mineral springs Hronovka and Regnerka with alkaline-ferrous water bubble onto the surface.

Dear guests, we warmly welcome you at the Garni Hotel Tommy, a conference and ...