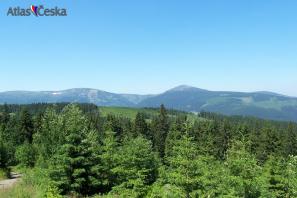 The mountain range of Krkonoše is situated in the Hradec Králové region, lying in northern Bohemia and the southern part of Polish Silesia. These are the most visited, the highest, the oldest, the most famous and in accordance with many people also the most beautiful mountains in the whole country. The Labe (Elbe), Malé Labe, Úpa, Jizerka and Mumlava rivers have their sources and springs there whilst the dominating feature of the mountains is their highest mountain Sněžka, which rises 1602 metres above sea level and is the highest mountain in the country. The border between our country and  Poland runs exactly along the main mountain ridge. A chairlift goes from Pec pod Sněžkou through Růžová Mountain to the top of Sněžka. In the 17th century St. Laurence chapel was built on the tip of the hill. Other peaks of the Giant Mountains are for example Černá Hora, Medvědín and Studniční and Liščí Mountain.

The Giant Mountains are literally a paradise for sportsmen. Besides nearly three thousand marked tourist paths there are hundreds of kilometres of cycle tracks, from the easy ones in the foothills with beautiful panoramic views to more difficult fracks in the mountains. The Giant Mountains are connected by cyclo-tourist tracks to the neighbouring regions, for example with the Jizerské Mountains in the west and the rock towns in Adršpach or Orlické Mountains in the east. The Czech Paradise is not far away. The Giant Mountains are also a paradise for all the „white sports“ admirers, downhillers, cross-country skiers, snowboarders and bob-sleighers have their own back here. Multiple chalets enable an easy wayfaring from one place to another. The much-sought-after tourist ski resorts are Špindlerův Mlýn, Harrachov, Rokytnice nad Jizerou, Pec pod Sněžkou and Jánské Lázně, the latter offering, in addition to skiing, thermal springs.

The medieval gothic castle named Kost is one of the best preserved and the ...