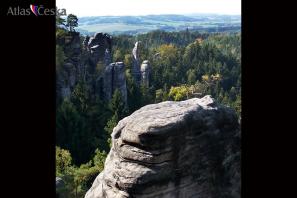 The Prachov Rocks form our most famous sandstone rock town, that lies on the southern border of Český Ráj (the Czech Paradise), about 7 km north-west to Jičín. Over an area of about 260 ha, you can find wild nature including a number of gulches, ravines, gills, view points, solitary sandstone towers, groups of rock blocks with narrow cranky passages. This is why the Prachov Rocks are one of the most sought-after sites of the Czech Paradise. Its a paradise especially for rock-climbers, but the most interesting parts of the rocks are easily available to all and you can choose from two carefully marked paths, that guide everyone over the most beautiful and the most attractive parts of this fascinating natural area.

The first is the short circuit, that takes only 45 minutes and goes through the beautiful countryside of Císařská chodba. The long circuit, which is probably the most attractive and  most interesting route between the rock massives, guides the visitors through a range of interesting places in the Prachov Rocks. It is 5 km long and lasts 2 hours. You have to take into account often forceful pulls, that may be very adventurous and that lead along the fascinating rocks. Visitors will see eight beautiful view points, Pechova Vyhlídka, Šikmá Věž, Vyhlídka míru, Hlaholská vyhlídka, Rumcajsova vyhlídka, Schlikova vyhlídka, Vyhlídka míru, Všetečkova vyhlídka and the highest peak, Hakenova vyhlídka, that rises 460 metres above sea level.

Both circuits starts at the shelter hut of the Czech tourist club, that was built in 1924, in the very center of the rock town. In hot summer days visitors can use the open-air pool U Pelíška. The Parkhotel Skalní Město was constructed for tourist´s needs in 1935. Since 1933, the Prachov Rocks have been a nature preserve, in 2002 they became a part of Czech Paradise protected scenic region.

We offer stylish accommodation in a newly reconstructed and spacious cottage situated in a ...

The observation tower on the Čeřovka hill is the oldest one in Český ráj. ...

The bizzare ruins of Trosky castle are situated about 9km south-east of Turnov, the ...

Dětenice, a Baroque chateau is located in a small village of the same name ...